OpenStack is a lot of open-source software instruments for building and managing distributed computing platforms. A great many people and organizations like Red Hat, Dell, and Rackspace have made OpenStack. They cooperate with the objective of making OpenStack the most robust and secure platform available. OpenStack competes with cloud stages, for example, Amazon Web Services and Microsoft Azure. Organizations us it to oversee both open and private veils of mist. OpenStack is an IaaS (framework as a help). The foundation makes it simple for designers to assemble administrations and applications on it. The OpenStack project was initially started by RackSpace in a joint effort with NASA in July 2010 where it increased a ton of consideration in a short period of time. NASA contributed their code from the Nebula cloud task to OpenStack compute, and RackSpace contributed the majority of code behind their cloud stage, explicitly Cloud File items. Technology giants like Intel and Dell grasped OpenStack following it began and now there are more than 140 organizations that help the OpenStack activity. Giants like IBM, AT&T, and HP all as of late declared they've joined OpenStack and Sony has moved a bit of its PlayStation administrations from AWS to OpenStack in Rackspace in the wake of experiencing a digital assault a year ago which made a significant blackout their administrations.

OpenStack has a client-server architecture that provides a REST API to the user through which requests to the server can be performed. All the file (Image data) operations are performed using a glance_store library, which is responsible for interaction with external storage back ends and (or) local filesystem(s). The glance_store library provides a uniform interface to access the backend stores.

Glance uses a central database (Glance DB) that is shared amongst all the components in the system and is SQL-based by default. Other types of database backends are somewhat supported and used by operators but are not extensively tested upstream. 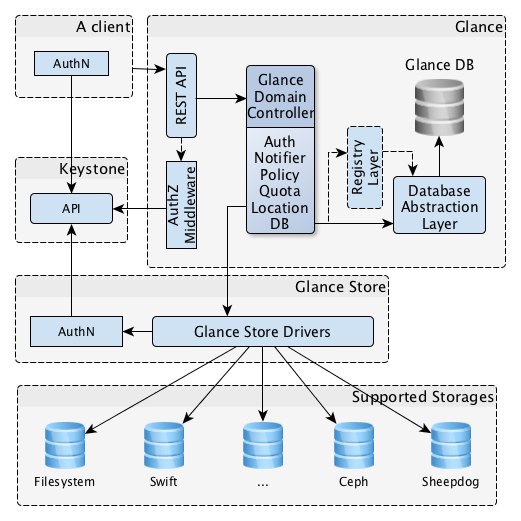 Following components are present in the Glance architecture: